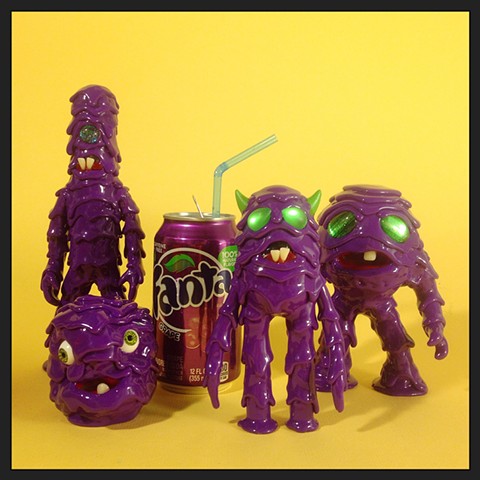 In about 2000 I started painting on glass and over a few years of "figuring out my style" I was happy with what I came up with. I have never limited the materials used in any "painting" and through enough trial and error I found a system and it worked! I used to design t-shirts under the name MonsterArm, most of which were Horror/Sci-Fi related from about 2006-2009. Starting in late 2011 or so I have been making custom toys/sculptures inspired by sofubi and various other monsters. I call them MeltMonsters. That is also a "system" I've figured out through a ton of trial and error. It's always evolving in a good way. They have been a blast and I have been cranking them out left and right. I made a "toy a day" for the entire year of 2012. Still made as much as I could in 2013 and as for 2014 to present, I felt like I have turned a new leaf in my MeltMonsters and Im making new and much better figures. Lots of them are inspired by characters from Yo Gabba Gabba and other Christian Jacobs endevors. Ive been making my "melt versions" of various characters and taking things I enjoy, like coffee and sasquatches and giving them the melt treatment. I’ve taken the melt to frame and made “portraits”, covered guitars and ukuleles and made “StashJars”, “MeltBuckles” and pendants all in the melt style. I also make a ton of music under the name Ancient Radiations which can be found anywhere music is streamed. I try to update with pics often but instagram is the way to go if you want to see work from day to day. Thanks in advance and enjoy! As a side note, people should not ask an artist how they created something or what they did to make it happen. Have some respect. Tread lightly on other artists work, when you rip someones style off you usually just look silly.

Another side note… if I have misspelled a word or two, I don’t care. Save your “spellcheck.com” sales pitch.